104-Turning The World Upside Down… 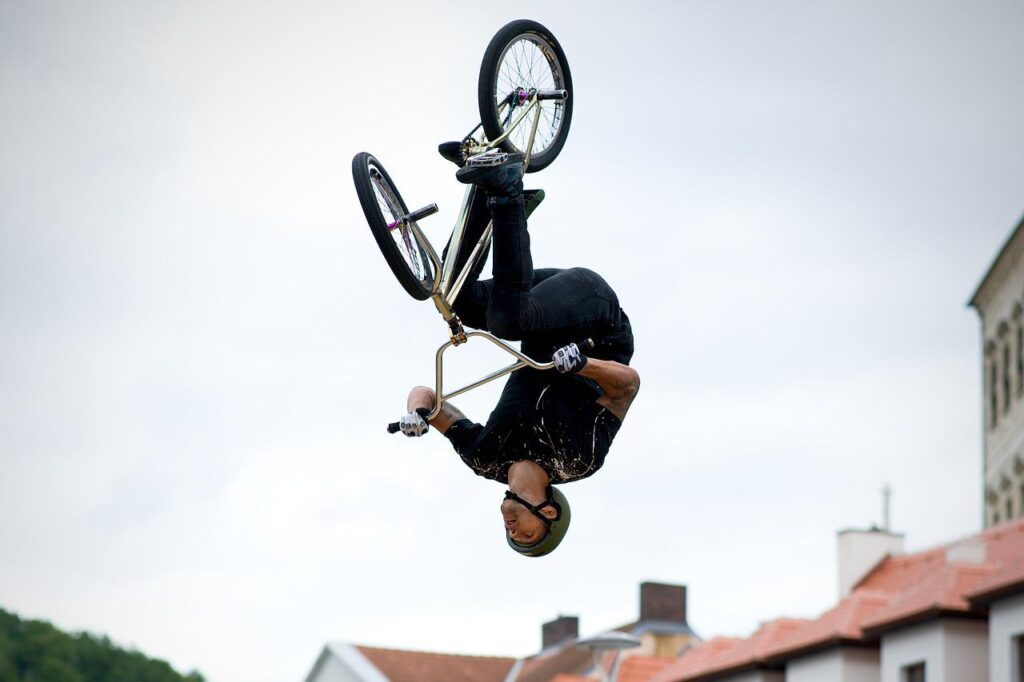 104-Turning The World Upside Down…

After a quick squeeze of the blue-walled tires, satisfied that they were still firm to keep pavement riding smooth enough to avoid the slog of a flat tire, I pulled on my kid-sized helmet (don’t tell anyone I still wear kids gear and shoes…), gloves and glasses and got all five foot four and three quarters of me on the saddle.  The right shifter on my Sette frame mountain bike was still sticky from a long winter of sitting in the garage, but mentally I was too far gone already to care.  Thoughts of pulling and riding a wheelie for a quarter mile, jumping park benches and balancing perfectly still at crosswalks kept me engaged with the city scape of downtown Flint, Danny MacAskill videos rolling across my mental theatre.  I couldn’t do 1/100th of what that guy can do, but jumping of the six-inch curb felt right as I pumped my way through downtown to pick up the Genesee Valley Trail which seemed to climb and climb and climb… what is this hill even doing in Flint anyway?!

This season of transition has set my focus of wilderness ministry into refraction, much like light through a prism, revealing all the components that make up life change.  It’s not just going on incredible wilderness trips that raise your heartrate and push you in every facet imaginable.  Nor is it sitting down one-on-one and opening your Bible with a kid and challenging him in his faith journey.  No, this season I’m learning that it’s TIME.  Not just the idea that it would take time to pour into teens, I’ve understood this principle for quite some time which is why I’ve made Project Forty my full-time ambition and career.  It’s the little bits of time that we spend throughout our day; all of us.  As I’ve been learning through a training by The Timothy Initiative, we are called as Christians to make disciple-makers.  This takes time in the spaces between what we see laid out neatly in various colors in our paper planners or on our devices.

This month it was a trip to AutoZone to buy a new brake caliper.  I only planned a thirty-minute run and had my diaper-less, three-year-old son with me which makes those thirty minutes much more relevant to keeping a schedule.  Who knew that a former mechanic could talk so long about his grown sons, their relationship with their dad, and the ups and downs of their lives which opened the door for a spiritual conversation.  Seeds are planted this way and it didn’t take a ton of effort on my part, just a couple of questions and genuine interest in listening…that’s the hard part.  TIME.  The ladies at the landscaping store couldn’t understand why I knew their names.  It was simple, I asked them their names the first time I was in earlier that week, remembered them and used them.  They were so receptive to hearing my story and God’s story simply because I knew their names.  The same goes for waitresses Ashley and Madeline, close to tears when they shared prayer requests with me because I said I was going to pray for my meal anyway, “Is there anything I can pray for you about?”

This week I have an alarm on my phone that goes off four times a day to remind me to keep my “sails up,” spirit attentive to the Holy Spirit and focused more on what God wants than what I want.  God chose to use the disciples that He groomed to change the world and they turned the world upside down by listening to the Holy Spirit and obeying whatever God asked them to do.  To Philip the Spirit guided him to talk to the Ethiopian and a family was changed.  To Paul the Spirit guided him to speak to cities, leaders, and entire mobs of people out to kill him.  To Stephen the Spirit gave him one of the most incredible accounts of the history of God’s people that I think I’ve read and with it came his time to sit with Jesus in the heavenly realm… which is a good thing if that’s God’s plan and timing for you to leave this world.  If we identify as a Christian, then we’ve given up our rights.  We are to die to self and that means that we give up all the moments that we claim as “ours.”  They are not ours, they are God’s and if we become attentive to them, who knows how powerfully we can change the world.  We might even just “turn the world upside down” (Acts 17:6).