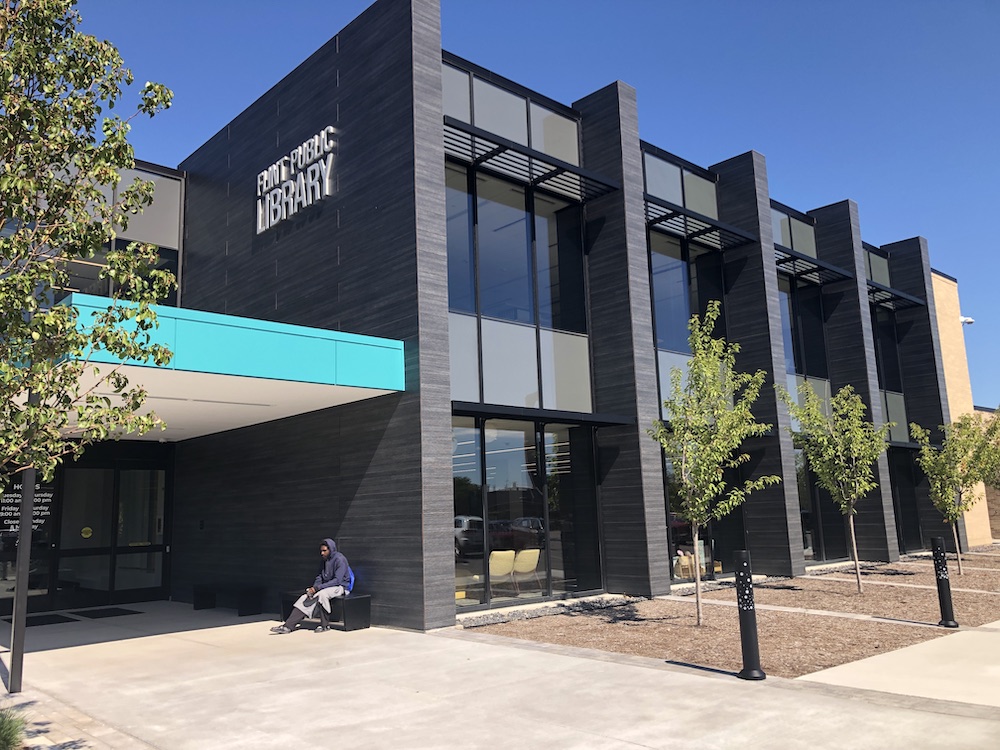 As my tires slowly rolled past the shiny new glass, I could clearly see the print on the window of the renewed Flint Public Library.  It read, “Tuesday-Thursday 11-8pm” and “Friday-Saturday 9-6pm” so I backed up my faithful Saturn, which has been hiding the rust under its plastic panels beautifully, into a position to park, confident that the few cars in the lot must have been employees and I’m just the early-bird to use its services… me and the guy sitting on the bench while I drove my shenanigans around the parking lot.  Confident as Charles Blondin tight-roping across Niagara, I walked up to the automatic door, backpack slung over one shoulder, fully expecting the doors to part like the Red Sea.  It didn’t take long for me to realize that the guy on the bench wasn’t sitting outside for the enjoyment of the morning sun, nor that it wasn’t Friday.  The Thursday reality tour took off and my brain quickly computed that 10am was not 11am, and I had an hour to sit before that door would open for me.

So, what else could I do but start up a conversation with bench guy, patient as ever but now with my company on the bench immediately adjacent to his.  What began with a, “Hey, what’s going on?”  quickly moved to me sharing my story a bit and acquiring that this guy claimed to be a Christian.  He also claimed homelessness and ID-lessness, which is turning out to be quite the common thread of the guys that I’m meeting on the streets of Flint.  “Have you been to the hospital lately?” I chimed, getting bolder with my questions.

“Yeah, I have actually” he gladly reported, “I was picked up because my leg was shaking from all the walking that I do.”

“You interested in getting your SS Card?” I pressed.

“Yeah, if you don’t mind.  That would be great!” he said as he stood up wearing all of his belongings on his person, and I’m not saying he had a bag, pack, or lunchbox—nothing but the clothes on his back.

“I’ve got an hour before the library opens apparently; let’s do it!”  I offered and we moved toward my trusty ride.

Bench-guy and I started at Hurley Hospital’s dungeon-records-room in the basement.  Realizing that my internal compass doesn’t work without sunlight we got lost a bit, the second time for me this week, trying to escape from the belly of the brick and mortar beast we entered.  From there it was off to the Social Security Office which had us in and out before the library opened for business!  Would you believe that if we walked into First Presbyterian Church in downtown Flint without an appointment at 11:05am on a Thursday morning, that the original 11 o’clock was a no-show so we were seen with a 5-minute wait?  Lisa saw us straight away and was amazing, tracking down elementary and high school transcripts in Maryland from a school district that we weren’t sure existed.  Transcripts were mailed to Catholic Charities, where we established a mailing address.  Props to Bradd with two “d’s.”  We did make it back to the library after a solid Hoffman’s sandwich washed down with a strawberry lemonade.  I couldn’t help but feel like Andy in Shawshank Redemption, feeling like free men, having a real lunch from a real sandwich shop downtown on a warm, sunny day.

Our time ended when I dropped him off at the shelter on Grand Traverse for the night.  Since he had been persistently attempting to get in for several nights, the shelter director said that if he got there an hour prior to entry, they’d make it happen—and they did.  I received a call the following day that an ID was going to be ready in a couple days’ time with bench-guy’s actual name!  Thursday was quite a day and it cost me roughly five hours of my time, but I wouldn’t trade those five hours for anything.  My other homeless friend has been waiting months to get an ID, but boy did we learn a lot about how things work!  I continue to use this phrase “do life together” and this is an example, extreme as it may be, of that very thing.  The world is lost.  The world is hurting and filled with individuals longing to be together, separated by an invisible web of networks and earbuds.  You would be amazed at what YOU can do with the phrase, “Hey, what’s going on?”