75-Remember That Time When…? 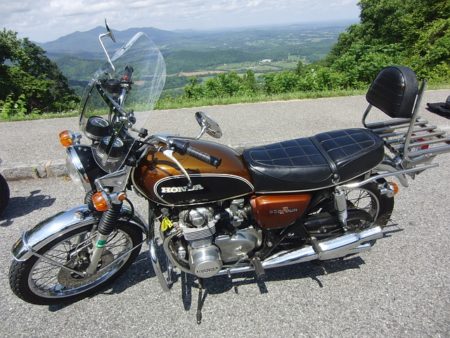 75-Remember That Time When…?

“When I bought my first motorcycle my buddies and I took our bikes to the pit. I had a street bike, had no idea what I was doing, but they said, ‘Kenny, ride that thing to the top of the sand hill!’ I jumped on, not really knowing much about motorcycles, took off and as I hit the bumps on the hill I grabbed the throttle tighter then making me go faster. I was completely out of control, feet were flying off the pegs, no brakes… near the top of the hill I managed to cut the handlebars sending me flying back down the hill in complete disarray, still trying to get my feet back on the shifter and rear brake, bouncing all over the place! Just about the time I reached the bottom, my feet found the pegs, I squeezed the clutch, slammed on the rear brake bringing the bike to skidding stop in front of the guys. ‘Awesome! Man, you really know how to ride!’ they cheered as I was just thankful I kept my body in tact as I thought I would surely be landing in a hospital if I made it out of this mess alive.”

That’s just one of many stories my dad has shared with me over the years about his life as a young man. “When I was your age,” he would say, “we used to build snow forts in the yard, load up on snowballs and throw them at passing cars on our street. Every once in a while the car would stop and we’d take off around the house. I walked to school both ways, and came home for lunch (uphill both ways, of course). On my paper route I had to ride my bike to the train station to pick up my newspapers, then complete the route early in the morning—everyday. The neighbor boys, my brothers and I would play hockey all day and into the night on Simonson Lake. Our feet would be freezing but we just kept playing til your grandma would call us in for dinner.”

As one who operates bulldozers for work, I never questioned the purpose for placing padlocks on the fuel tanks… clearly it because my dad put sand in a tank back in the early 60’s and the contractors got wise to protecting their expensive equipment from the curious neighborhood boys. During a recent conversation with the UPS man an unfortunate reality was given skin, “What stories are kids going to tell their kids and grandkids 50 years from now, ‘I broke record scores on Fortnite when I was your age, son.’” Seriously? Or, “I had over 50,000 Facebook friends, and a million views on my YouTube video,” in which case the response will most likely sound like, “What’s Facebook?”

The National Environmental Education Foundation (NEEF) conducted a survey in 2017, revealing some startling facts about our teen culture. On a typical school day, the average teen only spends one hour a day outside. What?! That time could be waiting for a bus, walking from their car to their destination or some other routine function of living that just happens to be outside. I don’t think teens are running outside to go hike at their local park for an hour a day… yet, 9 in 10 recognize that spending time outdoors is good for their health. So, what does that mean? Well, 8 in 10 prefer to spend time indoors, yet most of them recognize this is probably not the healthiest lifestyle for them—we have a real problem on our hands.

I can’t say that I haven’t ever known something was good and healthy for me, but declined its invitation time and time again. If you set a plate of freshly baked chocolate chip cookies in front of me next to a plate of broccoli, I’m taking the cookies. Even if the cookies are store bought and not really satisfying, they still win over broccoli. It’s unfortunate for me, and often I need a reminder of the greater good concerning my health and fitness to push me to make wise decisions regarding them. Turns out our youth have the same issue. Stick a new time-sucking app in their hands and they will spend their days perfecting it, “connecting” with other people or doing whatever else it is that glues their phone to their palms. They need encouragement to spend time outside—they know its right, but need someone to “put the cookies in the pantry til snack time.”

It’s human nature, our sin nature and the lack of intentional living. My dad is a great storyteller because he has a story to tell. Let’s keep the stories coming… my fear is that they will die out with my father and grandfather. What do you think about this concept? What stories will your kids share with their grandchildren? I’d love to hear what you think; I’m sure there are still some good stories out there that spark adventure, challenge and hope for a life outside the mundane!