77-This Ain’t The Red Sea, And You Ain’t Charlton Heston 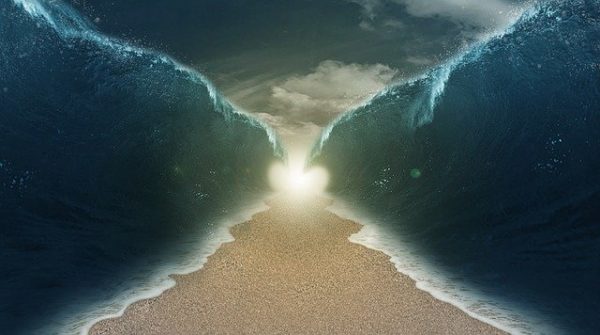 77-This Ain’t The Red Sea, And You Ain’t Charlton Heston

I know this is completely out of season, but I have to share it anyway. I need you to get into your imagination a little bit, going way back to the time of the Exodus. Yup, you are one of the myriads of people who have permanently picked up their families and walked away from slavery… unfortunately it’s the only life you have ever really known. Leaving behind complete dependence upon Pharaoh, you excitedly accept the offerings of gold, silver and clothing as you victoriously march out of the captive city in ranks, the only home you have ever known. God, who calls Himself YHVH and has shown Himself to be higher than all other gods of Egypt, even as the only true God, has led the way so far through His mediator, Moses.

You have been walking for days, eyes growing dull from the view of the guy’s head in front of you. There was quite an excitement on day one, a massive show of divine power, which struck personal and powerful, leaving you in amazement, but trembling should this power be turned against you. Your confidence is beginning to waiver as you look to your right, then slowly to your left. The rocks that guarded your journey have turned into inescapable walls that seem to close in on the millions who are filing in between them. Although you’ve never traveled this far from the city, you have heard of a great sea in this eastern region and your descent has you questioning if you are closing in on it. Even if we reach the sea, we don’t have enough boats to cross it… or materials to make anything worthy enough to attempt a crossing. Suddenly, your thoughts are interrupted by shouts of terror and horses mixed with the battle cries of savage beasts looking for vengeance. Trapped. We are as good as dead. Just as you can’t imagine anything more terrifying than an army of chariots shredding through the millions of innocent families, your eyes quickly seize shut out of a their natural protective quality to shield themselves from the impressive pillar of fire that has suddenly appeared from nowhere. The cheers from the back of this caravan settled your immediate concerns as this blazing wall of terrible flames seem to be protection in this earthly prison against the sea.

What happens next is straight out of a Charlton Heston movie. The sea splits into two halves, the wind holding back these heavy walls of water that clearly out rank them in raw power. Another miracle, but I’m not going in there! You can see Moses ahead of you, staff extended, looking like a boss in the moment. But still, nobody moves a muscle. Even with the signal to follow him into what appeared to be an open grave in the cold, untouched soil—Moses stood alone.

This is the moment. Everybody is still. You have been an eyewitness to many miracles up until this point. You have seen this God defeat Egypt’s powerful gods and leadership. You have no reason to doubt that walking into this hole in the earth, dammed by tons upon tons of bone-crushing walls of water, will work in your favor. Still, why hesitate? Waiting for the guy in front of you to move? That seems like a logical response to the given circumstances.

Come on back to 2019 if you haven’t already. As I thought about that massive crowd trapped between an angry and bloodthirsty army and an insurmountable body of water, I wondered “who stepped out first?” I mean, Moses seems like the logical answer there, but according to the Bible (Acts 7:37, Deut 18:15), he was compared to Jesus so I don’t think he counts. Did they all rush in at once? I imagine a frozen moment of disbelief and fear, a moment where nobody moved a muscle. I’m willing to bet it just took one from the crowd to lift his/her leg, extend it forward and take a step. From that moment on, from the one who took that first step, the crowd marched confidently into the sea, and through to the other side. So the question is: where has God asked you to step out? Are you waiting for someone else to take a first step? I know if/when they do, it will be a lot easier for you to step out as well… but what if no one else takes the step? Maybe, just maybe, everybody else is waiting for you. Think about it.