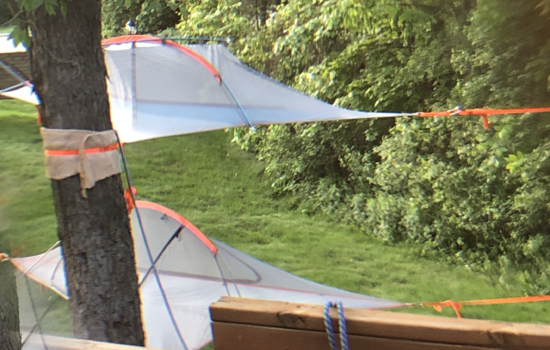 My feet nearly glided over the edges of the steps leading to the Project Forty office to grad my Tentsiles, webbing, a rope ladder (all common household items at the Foss residence); then skipping steps on the return to maximize speed.  Even the mosquitos buzzing my ankles, looking for a good place for lunch could not deter my drive to stack these tents higher than the last test run.  The ladder teetered under my feet, which were firmly planted on the last step, shins driving into the top for a sense of stability.  Down the ladder, up the ladder, and back down.  My mind was getting a workout as I visualized the equilateral tension that this two-person, hammock-style tent would require between the three solid trees that characterized my front yard.  Tension-in-line, put a biner on a butterfly, bring it back to make it a 3-1 pulley… I thought, while spouting instructions to my excited seven-year-old son who would be accompanying me on this beautiful summer-ish night.  “Silas, how high should we go?”  “Ten million thousand, dad,” came his reply as if he has been thinking about this all morning, just waiting for me to ask him his opinion on the matter.  “Well, seeing that I am a short man on a six-foot ladder, I think we’ll have to settle for about nine feet.”

The nostalgia of sleeping in a tent nine feet off the ground, accessible only by a rope ladder suspended on a secondary rope between two trees started to wear off on me and Silas around my fifth adjustment of the straps, after one gave out due to Silas, in the spirit of adventure, was swinging from the tail of a strap, twisting it out of proper positioning.  Confident we finally had things right, we quickly set up the second Tensile directly under the first, which went much faster and gave our hope a reboot.

Nightfall was upon us now, as we began to put our strategy into action.  Silas scrambled up the ladder first, unzipping only the bottom portion of the mesh door.  “Take this and slide it in, keeping the mosquitos out…”  I ordered as I handed him our blankets, pillows and teddy (of course).  As I fell into the saddle of the tent, I quickly zipped our only barrier against the rage of the little vampires who had caught on to our objective, then realized that the center strap to the tent was too loose, rendering our multiple efforts for perfection useless.  Oh well, I think that I can manage with this set up… so I’m sinking a little toward the middle… there was too much pride in that tent to admit defeat, even when 3am approached with only an hour of sleep actually accounted for.  By 4am, not only could I log 2 actual hours of sleep but also that our condo association had the sprinkler system up and running!  The air bleeding out of the lines forced my eyes open with a jolt, then Silas sat straight up.  Maybe we are high enough in the air the water will pass below our tent and we’ll be unscathed… as soon as the thought came it was quickly defeated by pelting drops of water saturating the rip-stop nylon, into my blanket and down to my skin.  The next pass came topside through the mesh and Silas held his pillow up as a shield to absorb the blow of the water.  “Si, we have to abort this mission.  Here’s the plan:  wait for the sprinkler to pass then I’ll get out first.  You toss out all the gear then climb down and book it to the house.  Ready? … Go!”  As I jumped down and took a direct blow, I could hear Jen from out bedroom window laughing and cheering us on!  Silas fought hard that fateful morning, blasting through enemy lines, burdened with pillows and shielding teddy from enemy fire.  Back in the safety of our base, we regrouped then resumed our overarching mission: sleep.

As I was bouncing around ideas for this blog, I was thinking about all the political stances, viruses, fears, cultural impact from racism amidst trying to sort the truth from all the lies.  Important?  Yes, but then I thought, what if we just take a break and have a little adventure?  At first, I didn’t think that I had any adventures lately until my friend pointed out I set a tent up in a tree—who does that?!  True, true and it reminds me that we can all have adventures right where we are.  So, my challenge to you is to seek out an adventure right in your own backyard and pull your family into the fun!  For more ideas about what you could do, check out our free resource: Outside On The Inside.  Have a great weekend and enjoy the journey you are on.