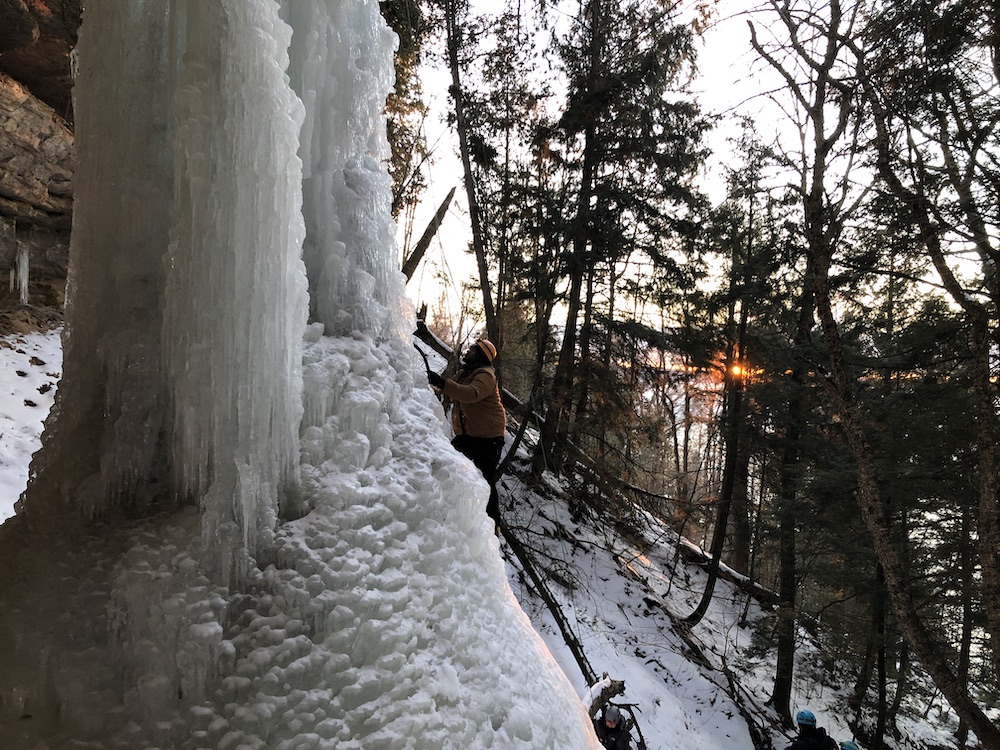 The air was brisk as I knelt down in the snow to fasten on Tony’s snowshoes.  He had never been snowshoeing before, along with the other four guys from Flint who willingly stepped way outside of their comfort zones to join this Project Forty adventure.  Munising sat quiet and still just across the bay formed by the Superior waters between Grand Island and the mainland Upper Peninsula.  The ice shanties yielded small, steady streams of smoke, the only signs of life besides the breeze that carried the loose snow across the thick ice.  Silent cold instilled the feeling of the unknown adventure that lie ahead as the team of seven began their trudge along the Lake Superior coastline, unsure of what to expect apart from the cold itself which feels like an unmatchable, faceless enemy of the human soul.  It can break you if you are not careful, a force one should not take lightly.

Although the trail was packed down from the steady traffic of the local outdoor enthusiasts, the two-mile hike encapsulated the epic nature of a first-time experience, complete with sore feet, cold hands and the feeling of wanting to curl up into the fetal position in front of a cozy fire.  Fortunately for all of the us, the mission didn’t end with a mere walk into the woods… a seventy-foot frozen waterfall has yet to be rappelled!  I could see the water flowing beneath the inch-thick patches of ice that sculpted the top of the rappel site.  “Yahweh, thank You for Tony,” I began to pray as we stood shoulder to shoulder, leaning slightly out over the large abyss that marked the beginning of the descent.  Our anchors were secure, ropes intact, knots dressed and distributing weight in harmonious twists and turns, and rappel devices locked and loaded… Tony was ready and not ready all at the same time.  He may have continued that prayer that I started from the top as he began, one crampon at a time, to walk down the gigantic pillar of ice that goes by the name of Sweet Mother Moses.  One by one each climber tied in, prayed with me and descended for the first time over the edge of a seventy-foot cliff on a cold pillar of ice…

On our hike back to the van, headlamps creating small beams of light to illuminate our way, we talked about the events of the day.  “I have never been outside this long before,” Tony spout out as we tromped through the snow, now well below the ridge and approaching the safety of civilization.  “Really?  Like in all of your life?” I came back with a bit of surprise.  It was at that moment that I began to realize the magnitude of what these courageous young men have done.  They didn’t need more adventure in their lives, many of them had it built-in just by their living situations growing up.  It’s an adventure living on little, working hard to provide and live a life that could thwart the negative societal pressures that had potential to ruin any future one might have dreamed of as a child.  Growing up in inner city Flint probably had more stretching experiences than I had growing up, which revealed even more power of character that they demonstrated as I listened to the list of firsts: first time hiking, snowshoeing, being outside for a day, seeing the stars without light pollution, eating as a family, taking 4 days away from their phones, crossing the Mackinac Bridge, seeing Lake Superior, rappelling, ice climbing… the list goes on.

I would like to give mad props to the five men who have just paved a way for the next group of young men from the city of Flint, MI who say that ice climbing is too cold, too hard, too crazy of a trip… they are world changers, stepping out to change the way the outdoors is explored.  This is God’s creation, His playground and it is meant for His creation, to whom we all equally belong.  What firsts have you done lately?