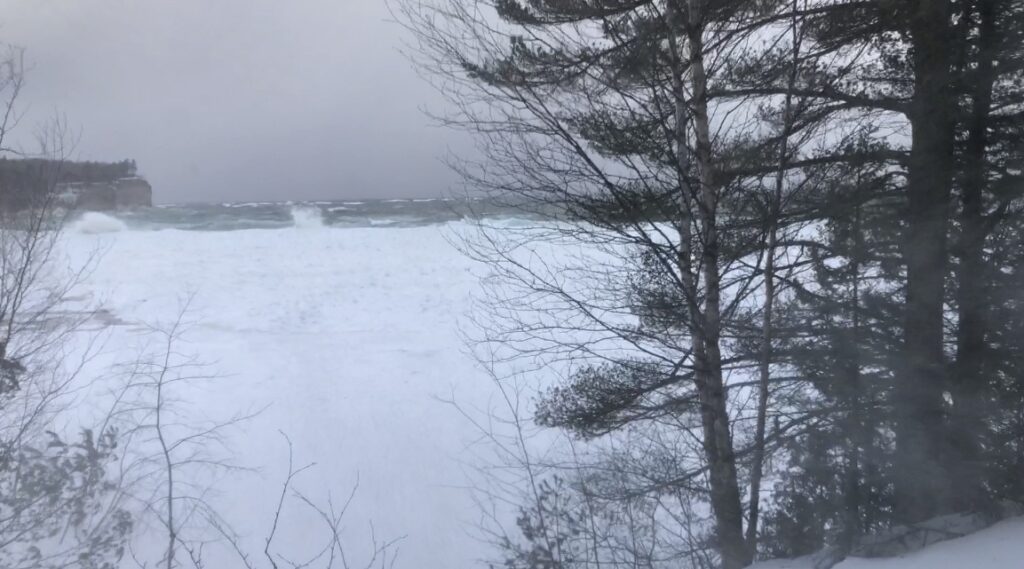 Forty-two degrees is unseasonably warm for the frozen shoreline of Lake Superior as February snow typically pushes back the sandy Chapel Beach deeper beneath it’s growing weight.  The ice formed by persisting water seepage atop the cliffs and the blasting falls that fight against the slow formation that freezes its power in its tracks, yielded to the even stronger ball of fire that dictates our life on this planet.  Dropping in the middle of this fire and ice battle made for its own set of challenges as the six of us toiled over what layers to wear to create the perfect body temperature regulation—not too hot, not too cold, and definitely no sweating!  (Sweat is water, which turns to ice in below freezing temps—”warm and dry” is the way to go in my humble opinion).

The hike out to Spray Falls was a battle against the changing temps as our pace set the tone.  To our dismay the climb was not in, meaning the ball of fire was winning against the power of the cold to turn free flowing water into a solid mass ready for our crampon attack.  We busted out the stove and made some of the best pancakes known to man, and assessed what kind of adventure we could have given our hand that was dealt without compassion for our long drive and seven-mile strenuous snowshoe to visit this precise coordinate. The warmer temps yielded a front that dumped large, wet flakes of snow that melted instantly upon contact.  We were ready to rappel the seventy feet to the ice shelf below but our plan was carefully reconsidered as we prepared for the inevitable—wet and cold.

“Did we just hike all the way out to Spray Falls for pancakes?” echoed in my mind as I felt bad for those who have not had the opportunity to witness the cool breeze caused by the powerful blast of water rushing behind the thin ice wall that you delicately swing and kick into in order to make your escape to the safety of the trees.  Yup, we did just make that trek for pancakes… but I knew that it was the right decision, feeling confident in my risk management choice for the sake of the entire group.  However, I also knew that God has his plans and thoughts that far exceed anything that I could conjure up and we still had twenty-four hours left to see what it would be.  As we trudged back to camp the temps dropped significantly, and everything that was once wet turned into a solid object instead of an easily wring-able article—especially John’s rain shell.  After organizing our personal gear and retrieving our evening meal from the bear bin (a steel container to keep the bears from enjoying a little late-night snack), we hunkered down into the fly for what has been dubbed understandably as “fly-time.”  In the mountains fly time can last for days in whiteout, but this time it was capped at several hours.  Laugh, stretch, share, pray, indulge in some backcountry goodness, and laugh some more we did… and we did it well.  Sleep came easy, even above the roar of the wind that was pushed in by the cold front that continued to drop the temps from the low forties into the single digits.

With packs saddled snugly on our backs by the break of dawn we emerged from the safety of the tall pines to witness God showing up in the power of the wind and the waves on the bay at Chapel Beach.  The water poured over itself as large breakers smashed into the walls of ice and rock that redirected the flow straight up in a tower of white wash.  Shouting over the noise of the air rushing past our ears and burning our exposed skin we confirmed that it was the most powerful show of God in a storm we have ever seen and that we shouldn’t be here… we turned our backs to the wind and headed to our own realities that we left back in civilization.  It could have been easy to be disheartened at losing our second climb day to warm and unfavorable weather, but God doesn’t waste a moment.  Instead of disappointment we all realized that we needed that hike, the fly time and the powerful moment being caught in the mercy of the nature.  When life doesn’t go the way that we plan, we need to remember that it’s never our plans that create the change needed to yield the fruit of the Spirit that God is building in us—it’s His plans that bring about the fruit.  After all, He is the vinedresser and we are just the branches on a vine called Yeshua (John 15:1-2).  Press on, don’t lose heart… God has a much better idea.