93-Swimmin’ In The Moonlight 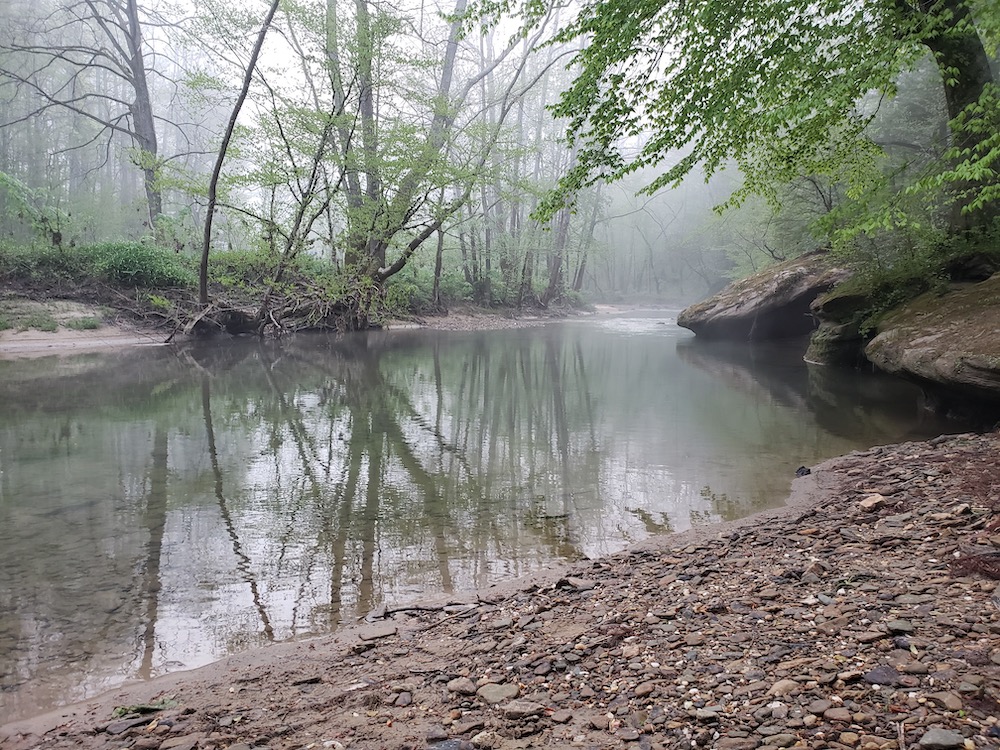 93-Swimmin’ In The Moonlight

How many spots have we passed already?  The sun had disappeared behind the thick collage of green, browns and blacks that made up the Kentucky forest in the cool of the evening.  Scouting out the perfect campsite for an OCD outdoorsman can prove to be quite the challenge sometimes.  Would the Tentsile fit between these trees?  Well, this one maybe, but it’s under a huge widow-maker that would not end well in the event of a storm… The entire time we were setting up, pulling every centimeter of slack out of the tree-tent that miraculously suspended itself three feet off the ground, I was keeping an eye on the cold, fresh water the gently flowed by our new, temporary home.  Each rock that lay on the bottom of pure glass could be described as if holding it in your hand and observing its wet, polished surface.  “I’m getting in that water before this trip is over!” I confidently declared to the guys, considering the fact that I didn’t have a towel to dry with, swim suit or way to heat up outside of driving away in the comfort of the closest thing to civilization we had… a 2015 minivan.

The morning of the second day ushered in the damp chill of a spring rain that resembled Fall more than the coming of Summer.  Our crew of seven layered up and picked at the few climbs sheltered by a towering roof that looked like God Himself balanced on the top of the cliff, cantilevering just enough to lock onto your attention and ask, “How much longer will that stay there?”  The cold rain turned on and off more than my two and half year old, mesmerized by our bathroom faucet, on-off-on-off-on-off.  If I go in that river, which I promised… it’s not going to be today!  The following evening however, finally yielded the conditions that a cold river dip would require—an awesome day of climbing, a push for at least one difficult climb that makes your armpits sweat, and quality banter from your friends as you grow deeper in your relationships… and it was much warmer than the day before!

By the time we retreated to our home away from home the moon took the stage, causing a slight reflection off the water illuminating the midst rising off the glassy surface of the river that called my name… “Matt, you idiot.  You’ll sleep so much better after a bath… you won’t get sick, that’s a wives tale; ice cold water is good for you…”  I mean, how do you resist that logic?  I gave the invite to everyone because who wants to be the idiot all alone, right?  Stark is in, good.  We had to let out a good “whooooooooo!” as the water made its way past our core until full submersion was inevitable.  The only consolation was that the midst meant the water was warmer than the air… let’s see, it was roughly 48 degrees outside.

Just after our refreshingly, chilled shouts we heard Caleb from the tent, “Do you actually have an extra towel for me if I join you?” Stark and I couldn’t hold him back any longer but gave a quick reply, “Heck yeah, dude!”  Once Caleb knew that he could dry off after the cold bath, he was all in, quite literally.  With our sweat washed off, our sleeping bags never felt better and the three of us drifted off to sleep after chatting a bit longer under our moonlit canopy.  What opportunities have we hesitated in or just plain given up on all because we didn’t have the safety net we would like?  I once toiled over the idea of moving up north for a season to work at a camp in Evert, MI… it wasn’t until my dad actually laid into me a bit and reminded me that he and my mom had my back that my fears were relieved and I could visualize the move.  “If you, then, though you are evil, know how to give good gifts to your children, how much more will your Father in heaven give good gifts to those who ask him!”  (Matthew 7:11).  God loves us so much and will not leave us hanging if we put ourselves out there and seek to do His will… which is more often than not much bigger than we can do in our own strength.  It’s scary, but would we move if we had the reassurance that He actually has us?  Be reassured—He does.  What’s holding you back right now?